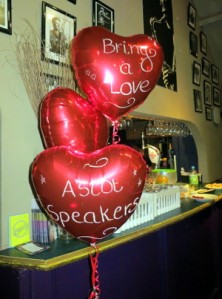 With Valentine’s Day just around the corner, the theme for our meeting this week was: What’s Your Passion?

This was also a special meeting of Ascot Speakers – it was a ‘Bring a Love’ meeting, where members were encouraged to bring someone along to show them what we do at the club.

It was a huge success, with the most visitors – 15 in total – we have had in one meeting.

Members and guests were greeted by Jamie C and Jordan S and they helped people to sign in on the correct forms and ensure everyone had a name badge and someone to talk to.

The meeting was opened by Acting Sergeant-At-Arms, Jonny C. He made everyone feel welcome and informed us of few housekeeping items before introducing the Club President – James H. He welcomed everyone especially the many guests we had present and formally introduced two new members to the club: Abby T and Lynn S.

Sheila HA was our first Toastmaster of the Evening, this is because we were privileged to have two Toastmasters; both Paola K and Sheila stepped up to the mark, despite having other roles, when the original Toastmaster fell ill on the night.

Sheila explained in detail, for the benefit of our guests, the agenda and protocol of our club night. She called upon Yannick LT who was our Timer to explain his role and the importance of keeping in time.

With Sheila’s other hat on – Grammarian – she explained what she would be looking out for in peoples’ speeches. She introduced the word of the day – ‘romantic’ and encouraged people to use it as much as possible, wherever possible.

The first speaker of the evening was new member Lynn S. She was doing her Ice Breaker entitled ‘Decide to Win’. The message from her speech was both inspiring and heart wrenching. After telling us about her life and how she has dealt with some very tough times, she expressed that we must believe in ourselves and “be bold, be fearless, be you.” The speech ended with a powerful message: “no matter what life throws at us decide to win”.

Our second speaker was also doing an Ice Breaker – Dexter B. His speech was entitled ‘Direction to Perfection’. Dexter described the different stages in his life, how it has got him to where he is and his projections for the future. His telling speech explained his dreams as a young man of becoming a footballer. He described how, once he realised he could no longer pursue those dreams, he came back and is excelling in the corporate world as an accountant.

Ann M was our third speaker with her project 4 speech ‘Learning to drive: Part 1’. Ann’s amusing speech depicted three attempts she had at passing her driving test in three different places: Dublin, North London and finally South London, where she passed. Each of her attempts she was met with inappropriate obstacles that stalled her journey past the ‘L’ plates.

Finally our last speaker was Nikita P who performed her project 5 speech termed ‘Red Eye to Kuwait’. This compelling speech recalled a nightmare flight during the start of the Iraq war. Everyone on board the BA flight seemed to be part of the army. They landed in Larnaca, Cyprus where the British Airways cabin crew disembarked and more army staff stepped aboard. The speech expressed her anxiety and apprehension about the rest of the journey which she made safely.

Paola K was also our Table Topics Master and her questions were around the theme of passions.

The set-up of Table Topics this week had a slight twist: Paola picked a random ‘passion’ and then called up on someone to tell us why it was their passion.

First to be called up was Monica H after being told that her passion was pickled eggs. Monica used a great diversion tactic and discussed her lovely new kitchen and how she is passionate about Moroccan food.

Abby T, a new member formerly from an English-speaking Chinese Toastmasters club, was up next – she had to describe her passion of sneezing. Abby described how was rather shy in middle school; when she sneezed she tried to be as discreet as possible and everyone thought she was ‘cute’.

Paola’s third asked guest Neelam (guest) to describe her passion of colour brown. Neelam told the audience how she used to have brown hair and now it is blonde and that it is quite easy to switch between the two.

Finally, returning guest Julie H was asked to tell us about her passion for the letter ‘G’. Julie’s highly amusing answer started off with her breaking out of her garment (cardigan). She pointed out that the letter ‘G’ was the most curvaceous and lovely letter in the alphabet emphasising many words she used that started with the letter ‘G’.  Julie won the vote for Best Table Topic speech.

Ruth M was Lynn’s Evaluator. Ruth described what what a privilege it was to evaluate such a touching Ice Breaker as her first evaluation. She went on to commend Lynn’s strong opening and powerful imagery that she used to draw the audience in. Ruth said that she loved the message that everyone is a teacher and that you can learn from anyone.

Hira S was Dexter’s Evaluator. Hira commended his great storytelling ability. She observed that he had used no notes which demonstrated excellent preparation. She recommended to stress certain words to keep the energy level up. She also recommended he make his next speech more professional by making it less conversational and laid back. She finished off by saying it was a great start to his Toastmasters’ journey.

Karolina E was Ann’s Evaluator. Karolina she picked out specific things that she enjoyed about Ann’s speech including the short precise sentences, specific and vivid words and the effective use of rhetorical questions. Karolina thought it was an entertaining, easy to follow and well organised speech and thoroughly enjoyed listening to it. Ann won the vote for Best Speaker.

Ian S was Nikita’s Evaluator and found her speech to be engaging and energetic. He suggested she ‘take the stabilisers off’ and attempt a speech without notes. He suggested that to pick a topic that one could speak from the heart without the worry about notes. Ian won the vote for Best Evaluator.

Reshmi B, as Table Topics Evaluator talked about each Table Topic speaker, a giving commendation, recommendation and finishing with something she liked best.

Sheila HA, the Grammarian, lamented that the word of the day seemed to be “so”, because so many people had used it. She commended the two Ice Breakers as neither of them had any “umm’s” or “ahh’s”. Sheila gave a detailed account of how many filler words each Speaker had used. She also commended people on specific phrases she enjoyed. The award for Best Use of the Word of the Day was awarded to Reshmi. The certificate for Most Expressive Use of English went to Ann.

The General Evaluator was Monica H, President of Maidenhead Speakers. Monica commended how welcoming the club is and how friendly all our members are. She enjoyed Jonny’s opening as Acting Sergeant-at-Arms. She commented on the amount of people at the meeting. For Maidenhead Speakers, a 30 year old club, around 30 people would be a “good meeting”. To get these numbers as a new club, she said that it was exceptional. Overall, Monica she thought the meeting was a great success.

The evening ended with everyone receiving their awards from Club President, James, and was closed by Jonny. Many people ended up in the pub for drinks, leftover biscuits, a member’s birthday cake and much talk.

The next meeting will be Wednesday 24th February at 7:20pm.

We look forward to welcoming you then.

This site uses Akismet to reduce spam. Learn how your comment data is processed.

We provide a supportive and positive learning experience in which members are empowered to develop communication and leadership skills, resulting in greater self-confidence and personal growth.

Disclaimer
The information on this web site is for the sole use of Toastmasters’ members, for Toastmasters business only. It is not to be used for solicitation and distribution of non-Toastmasters material or information.